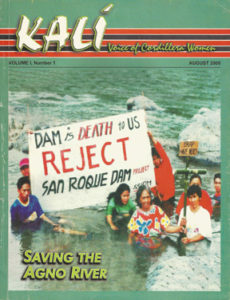 “KALI” is a local term of the indigenous kankana-ey people of the cordillera region, Philippines. It means to speak to talk. It also means to speak the dialect or language of the people.

“KALI” now comes to you as the journal of the cordillera women’s education and resource center (CWERC), back after some years of relative silence. We offer this journal as a voice expressing the various concerns of women in the cordillera, in the Philippines, as well as in other part of the world. It aims to present in depth the effort of cordillera women to understand their situation and to position themselves within the broader social realities. It deals not only with the particular concerns of women but with general issues that impact on women in particular ways.

It is clear from the start that our standpoint is in the interest of grassroots women belonging to the oppressed classes and sectors, particularly the peasant, workers, and semi-workers, youths, professionals and small business, indigenous peoples, lesbians and migrant workers. Particular focus and highlights will be given to the struggles of these women who have to deal with threats to their survival from day to day. We see their struggles and their victories as a significant contribution to the general cordillera women’s movement for national democracy, self determination and equality. May they serve as an inspiration for the millions of women around the world working for real change.

At this point in our history, it is with deep concern that we regard the situation of the indigenous peasant women in the cordillera. At the outset, cordillera indigenous peasant women experience multiple layers of oppression and exploitation – as peasants, as women and as indigenous people. They are subjected to various aspects of feudal and semi-feudal exploitation in the farms on which they toil for many hours. They experience forms of gender oppression within indigenous as well as imposed socio-political structures and institutions. They suffer discrimination and national oppression in violation of the indigenous people’s rights to self determination.

The push towards globalization and liberalization of trade has aggravated the situation of the indigenous peasant women. Policies and programs prescribed by the World Trade Organization (WTO) and multilateral financial institutions such as the World Bank and the international monetary fund have resulted in the displacement of indigenous peoples from their land, undermining their subsistence agricultural economies and weakening their indigenous culture. This has led to a host of other problems for the indigenous women such as poverty, unemployment, trafficking, abuse and others.

The San Roque Multipurpose Dam Project located in Pangasinan, Philippines is one such project designed to keep in line with the development paradigm of globalization. Natural resources, in this case san roque dam, backed t Agno River and its eco-system, are exploited by multinational corporations for their own profit and interests. The Japanese and American investors and funders of the San Roque dam, backed by the Philippine government under the administration of President Joseph Estrada, are ramming through with the controversial dam project. This, in spite of our sorry experience with the Ambuklao and Binga Dams along Agno River, the considerable adverse impact of mega dams on affected communities and the environment, the lopsided and onerous terms of the contract entered into by the National Power Corporation with the San Roque Power Corporation and despite the broad and militant people’s opposition to the project.

This issue of KALI features the San Roque Dam and the various aspects of the issue. Although no purely an indigenous peasant women’s issue, the San Roque dam is an urgent concern for all of us because it poses a threat to the survival of Indigenous and peasant communities in the Cordillera and in Central Luzon. We call your attention to this serious problem and urge you to be a part of the broad people’s movement against the construction of the San Roque Dam.