It’s not completely a new initiative. What makes this journey unique, however, is the utilization of positive aspects of customary institutions and values as avenues to promote indigenous women’s rights. It was a painstaking journey of human rights awareness and capacity building of indigenous women in 26 communities of Sagada and Bontoc, Mountain Province in the Cordillera region and in the municipalities of Alabel and Malapatan in Saranggani Province in Mindanao, from the last quarter of 2010 to 2013. It was an empowering experience for the participants who face human rights issues and violence against women due to conditions of militarization, development aggression, and poor delivery of social services. Development aggression in the form of corporate mining and energy projects is an issue of economic violence among indigenous women participants deprived of their access and control to land and natural resources. That empowering journey pushed them to speak and practice human rights as a collective, broke their silence about their own experience of sexual and domestic violence and mustered their confidence to access facilities and services that reduce their vulnerability to violence.

Their human rights awareness was not theirs alone. The indigenous women participants shared that awareness to their communities who became their support to access certain services and entitlements. The awareness was translated into having the skills to communicate human rights to fellow women within their organizations and communities, and to structures of leadership and decision-making.

There is now a deeper appreciation of having written documentation of their own experiences from the usual practice of oral tradition. The stories of the participants that they themselves have written are proof of how liberating the journey was. Their stories show were changes have occurred– in the mind-sets, attitudes or behavior, and in practice. These changes are difficult to measure. However, these powerful stories make the transformation more concrete.

This report also clarifies the role of customary institutions in protecting women from violence, and how women are respected traditionally. With the decline of power of indigenous socio-political institutions brought about by the dynamism in the wider society that indigenous peoples are very much integrated into, the protection or values that used to be accorded to women has eroded. It is vital to accord value on efforts made by organizations of indigenous women and communities in strengthening and promoting positive aspects of indigenous systems that provide protection for women against violence and danger.

Where there is a growing conflict between human rights and business, a larger gap between human rights holders and duty-bearers is created. Nothing would sustain the empowerment of women but their continued interest and collective actions to be liberated as productive members of their communities and the wider society. 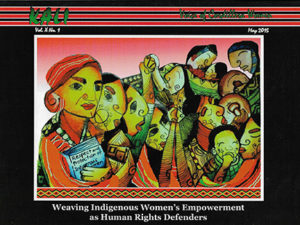