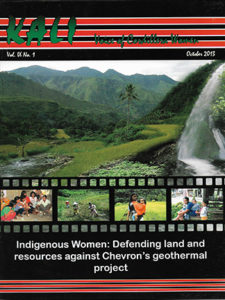 The study is aimed at strengthening the affirmative actions of local indigenous women leaders and their organizations. This is done through a framework where the local indigenous women leaders are involved in the entire process of the research. It is a process where the researcher is working “with” the community rather than working “for” the community. It is a process which empowers both the participants and the researcher. It is a research process that has a bias in favor of the poor, oppressed, and struggling women.

The study presents the important role of indigenous women in Western Uma in the municipality of Lubuagan in Kalinga Province. The Cordillera Women’s Education Action Research Center (CWEARC) saw the importance of documenting actions of women of Western Uma as a concrete process of indigenous women’s empowerment. This is also in the context that leadership of women in community struggles is not adequately acknowledged and projected in current documents.

The study reveals how indigenous women led community resistance against a geothermal project since the 1970s. The project is now being pushed by Chevron. It uncovers the Uma women’s tireless efforts to urge their village mates and tribe mates on the adverse effects and impacts of the corporate geothermal project particularly on their access and control of their ancestral territory, livelihood, environment, human rights and cultural integrity. The community mobilization on 18 May 2012 where women were in the front line as negotiators is an acclaimed event in Uma’s history of struggle, stopping Chevron in its insistence to conduct its temperature testing. Since then, Chevron never showed up in the village. This does not however say that Chevron abandoned its project. Indigenous women were involved in the formulation of community petitions and urged concerned government agencies especially to the National Commission on Indigenous Peoples (NCIP) to take responsible action.

“The people, water, land, forest and the trees are connected. Where will we live? Where will we find refuge from heat? Where will we get our food if you are grabbing our home?” These words of Beatrice Belen, a woman leader in Western Uma captures the Uma tribe’s view of land as life.

The indigenous women of Western Uma continue to hurdle the still prevailing feudal-patriarchal culture along with the challenge of not being publicly acknowledged as active agents in community struggles and development.

The study shows the strong connection of indigenous women to land and life, putting themselves in active defense mode when land and life is threatened. The study confirms that it is honor for indigenous women and dignity for the tribe to defend land, life, and resources. The active participation of women in the Uma tribe’s struggles, then and now, is enabling community leaders and members to agree that indeed struggles and community development will not be complete when women who are more or less half of the population are left out, not acknowledged of their productive and leadership contributions and are denied of opportunities to be empowered.