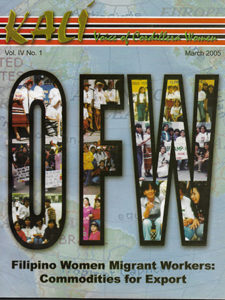 The Philippines is the number one labor exporting country in the world today. As of 2004, there were approximately 8.2 million Filipinos scattered in 182 countries all over the world. An estimated 4,010 Filipino workers leave he country each in search for jobs and greener pastures abroad. In 2004, OFW remittances amounted to US15-16 billion (ILO Data, 2005), contributing almost half of the countries gross domestic product (GDP). The cordillera region has the third highest number of OFWs of all regions in the Philippines, of whom 77% are women.

It is therefore not surprising that the widespread migration of Filipinos to other countries is an issue close to the hearts and stomachs of millions of Filipinos. It is not farfetched to believe that each Filipino family has a relative, friend or acquaintance working abroad. Each day, we hear and face various issues and problems of OFWs in our own homes, workplaces, offices, schools, market, communities, as well as in the media.

Yet, not many of us fully understand the issue of migration and the factors that push Filipinos to work abroad.  There are those who still believe that going abroad is due to a high ambition in life, or that it is a trait of Filipinos to be adventurous and to want to see the world. But it is now becoming clear that poverty and unemployment are the main reason for migration- a forced migration of desperate people, who are being sold, commercialized all over the world by our own government.

This research on the situation of overseas Filipino workers from the cordillera was conducted by the cordillera women’s education and resource center (CWERC) in 2002 in order to know more about the actual conditions of women OFWs and their families in the region. Case studies were done in selected communities, secondary date were gathered from government and non-government sources, and documentation of particular cases of individual victims was done, including the toll it has taken on families of OFWs.

The research also aims to present the historical context, which led to the widespread migration of Filipinos, and the role of the government in encouraging such migration. The research further shows that there are major contradictions between the labor export policy (LEP) of government and its professed role to protect the rights and welfare of Filipino migrant workers and their families.

With this issue of Kali on “Filipino Women Migrant Workers: Commodities for Export”, we expose the issue of labor export and forced migration, we sympathize with the many OFWs who are victims of maltreatment, abuse and violence, and salute the millions of migrant workers who are the unsung Filipino heroes of today.