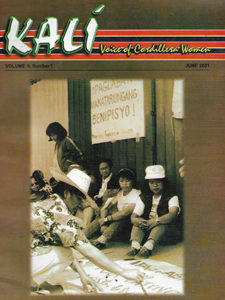 Women workers are among the most hardworking and productive forces in Philippine society. They work for many hours on end, in factories, firms, service establishments or plantations, in order to produce commodities and services from which capitalists earn their profits. Yet they can be said to be among the most exploited, hardly earning enough for their own and their families’ subsistence. They receive meager wages, usually below the legally mandated minimum wage, are often deprived of the benefits to which workers are entitled, and are denied their rights as workers to job security and to self-organization. In addition, they are discriminated against and oppressed as women, victims of a society which views women as inferior beings, as objects of entertainment, and as subjects of domination.

This second issue of CWERC’s journal KALI: Voice of Cordillera Women brings to you the situation of the women workers in the Cordillera today. It features women workers in two factories in the Baguio City Export Processing Zone where labor contractualization has become not just a trend, but the norm among the foreign-owned companies in the zone.

Labor contractualization negates almost all the labor laws and policies which have been won through long, bitter and bloody struggles of the workers throughout our history.

It allows capitalists to relegate workers to a position of enslavement by depriving them of job security and of all the rights of workers. It therefore has the overall effect of pulling down the wage level of the whole working class.

The research and case studies of labor contractualization presented here, give us a graphic illustration of the plight of women contractual workers and the hardships they have to endure. They portray the image of the woman worker: exploited yet resilient. Oppressed yet struggling for the well-being and dignity she deserves.