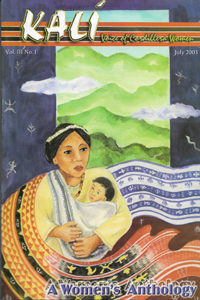 The Cordillera Women’s Education and Resource Center (CWERC) takes pride in announcing the birth of its first anthology of women’s literary and visual arts through its journal KALI. The time is ripe for the unfolding and sharing of women’s creativity and rich interpretation of the various facets of the people’s struggle in the region, and the country in general. The wellspring of people’s literature is the people’s struggle itself.

Through the years, the women’s movement in the Cordillera has not only continuously developed and honed women activists. It has likewise created a generation of chroniclers not only of the women’s struggle but of the people’s movement as well.

The actual involvement of writers and artists in the struggle for social change is the very material that is immortalized through literature, music and the visual arts. The victorious struggle against the Chico Dam development project was an inspiration to many and continues to motivate women writers and artists to draw parallelisms with contemporary struggles against development aggression. The pain and destruction wrought by imperialist incursion compounded by militarization is etched in the psyche of thousands of women in the Cordillera countryside but through poetry, music and sketches the collective experience is transformed into a sharper and resolute commitment to continue the anti-fascist and anti-imperialist struggle of the militant women’s movement.

A woman organizer is a cultural worker. She joins picketlines and barricades against capitalist exploitation in Lepanto Mines. She treks trails and mountainsides in Dalupirip, Itogon or the remotest sitio in Kalinga and Abra to understand the myriad issues and situations. To be able to motivate other women and the rest of the oppressed and exploited masses to get involved and act for their themselves entails a painstaking process of touching the consciousness and the spirit. Thus capturing through poetry, songs and colors the issues and problems that ail the people becomes an instrument in heightening awareness, arousing the reader or audience to take action.

The anthology showcases Cordillera-based women writers and artists. But a section has also been assigned to other writers and composers outside the region whose words embody the principles and aspirations of the militant women’s movement in the region.

This anthology is for all the people who tirelessly give the women’s movement the inspiration to pursue the struggle and the vision for a truly free and democratic society. And this shall not end here. The anthology of the people’s struggle is voluminous. This is but an initial contribution.