A Women’s Anthology of Songs, Poems, and Stories 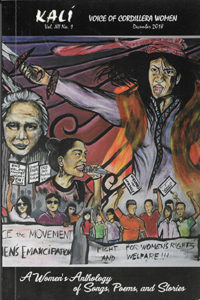 It has been fifteen years since the publication of the first volume of KALI, Voice of Cordillera Women. The first anthology echoed the Cordillera women’s recollection of the early struggles and their tributes to the victories of the pioneers of the Cordillera people’s movement, such as the participation of women against the Chico Dam and Cellophil Resources projects, and the ensuing burning issues of the early 2000s. The corruption and tyranny of the regimes that manifested as development aggression and militarization in the region were denounced by women writers, visual artists and musicians and they found their voice in Kali.

Much has transpired in the women’s movement in the Cordillera through those years from which we draw valuable lessons and insights. This trove of experiences and challenges has been translated into individual writers’ reflections and leaps; and collective dedication of communities and women’s organizations to the continuing pursuit of the aspiration of the women’s movement. Because development aggression still rears its ugly head and tyranny has fiercer fangs that preys on women, defense is much bolder now.

Women organizers in the indigenous people’s movement, women who work as staff in development programs, women who are mothers and income earners in communities, students who carry out cultural work in schools, have crafted their literary pieces, songs, stories, visual images as mirrors of their daily lives and involvement in the struggle for a better, humane society. Their aspirations are for a Cordillera and a country that practice and enjoy the fruits of self-determination in aspects of politics, economy and culture. In this period under a regime that spites human rights and reeks of misogyny and disregards the value of life, how is rage expressed by women who are not only the life source but also nurturers of generations? In this period of utmost deprivation and wanton disregard for right to life and security, how is resistance expressed by women who dare not remain on the sidelines but also take crucial tasks in the front lines? Women draw strength and courage from the heroism and selflessness of foremothers and ancestors who were not superwomen, but were able to combat fear, limitations and real enemies. The power to create, to transform, to reflect and act, to leave and break from the shackles of tradition and social limitations is a weapon that women in the Cordillera are learning to protect and utilize. The beauty is in the realization that they are validated by their fellow women in these perilous times, and supported by men who have deep understanding and appreciation of the women’s struggle. It is time once again to share the voice of Cordillera women to wider communities of readers. The poems, songs, personal essays and illustrations in this anthology are testimonies that we shall prevail, we shall not be daunted to express our fears and aspiration until true change has come to our Motherland.