Using the Law to Assert Women’s and Children’s Rights: A Handbook of Philippine Legislation on Women and Children 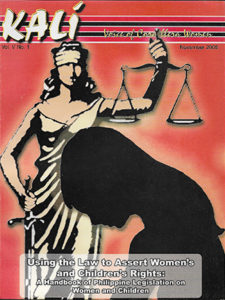 Historically, women in the Philippines held high status in society. We were Babaylans and katalonans (priestesses) then, who were very much revered and involved in the political, economic and social spheres of life. We were also central in the affairs of the clan, in production and decision-making. If there were at all laws or codes to speak of during these times, we were definitely part of the process and the results.

However, this status changed over time as we were influenced and controlled by Islamic laws and the colonial laws of Spain, America and even Japan. The making of laws was irrefutably reflective of our social context and space. For one, the issues of divorce, mobility, and property ownership for women which were recognized during pre-colonial times were radically changed by the Spanish Law that ultimately controlled and placed women in a subordinate position. Basically patterned after the Roman law, we inherit up to this day these biases against women from the Spaniards.

But history has also proven that today’s laws on women have somehow advanced to reflect the real issues and needs of women. The respect for women’s rights was reflected in Kartilya ng Katipunan at the turn of the century. Women’s role in politics has been recognized which is partially attributable to the Philippine suffragette movement. Today’s laws on labor, rape, sexual harassment, sex trafficking, anti-violence against women and many other were results of painstaking advocacy of the Philippine women’s movement.

“A harvest of laws,” is how lawyer Evalyn Ursua, a staunch women’s rights lawyer, referred to laws enacted as a product of the country’s women’s movement. She further asserted that these laws were borne out of the struggles of the women’s movement.

While these laws can be appreciated as concrete gains of the women’s movement, we cannot rely solely on these gains for the defense of women’s rights. For laws are nothing without action. Laws are not always equal to the justice system. Laws become toothless when the powerful and the moneyed class can buy their way out of the many injustices and violence committed against women and children. Worse, laws can be instruments of the state to further degrade and oppress women and children.

Violence against women and children continue to rise despite the existence of these legislation. These laws can be deemed futile for as long as the feudal, patriarchal and bourgeois culture is still very much embedded in our system.

It is for these reasons that the Philippine women’s movement needs to continue its efforts in reclaiming a truly just society, not only through legislative reforms, but through challenging the different social institutions that perpetuate injustice. This can be done through awareness-raising, organizing of women, community consciousness-raising towards prevention of violations and respect and promotion of human rights and women’s rights.