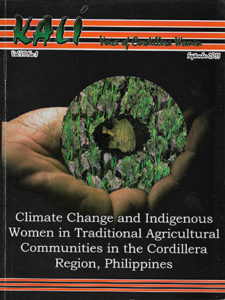 Indigenous communities are basically agricultural or peasant communities. An important indicator telling of change in an indigenous peasant women’s life is her family’s harvest or agricultural produce. In the phenomenon of climate change, an indigenous peasant woman would refer to a decrease to her family’s harvest to describe the environmental changes. Hence, it is important for every indigenous peasant woman to be keen of her family’s produce or harvest. This is a knowledge she learned from her long engagement of the land and the environment. Her tutors in agriculture production- her parents, fore parents, community elders and experts in traditional agriculture, who are usually women, taught her of the conditions of a particular land area her family or village tills, what care is required , what crops are suitable and the suitable or viable production cycle. She knows how many bundles of rice are produces per paddy and how long the harvest normally lasts.

The factor which could create a variable in their harvest are pests, water supply or irrigation and weather conditions like droughts, strong rains and typhoons. The stories that indigenous peasant women tell show these factors had always been treated as natural and so it was also natural for the farmers to adjust. In the process, they as farmers learn to cope up with the environmental changes. They develop innovations and corresponding adjustments or changes in their agricultural practices, develop new varieties of crops and innovated to maintain productivity. All these were part of their indigenous knowledge on agricultural production and bio-diversity management.

The last two centuries are hallmarked with great strides in technology, production and the standards of living, but these advances were achieved by the lopsided and illogical use and abuse of the world’s resources, which are mostly concentrated in indigenous territories. Abuse of the resources were done for the benefit of a few and to the detriment of the many, most especially the tenders and stewards of these resources.

At the forefront of this injustice are insatiable giant corporations of capitalist or northern countries whose relentless pursuit for profits demand the command of vast energy and natural resources. This arrangement led to massive environmental destruction and resources wars aside from massive environmental destruction and resource wars aside from massive dispossession and impoverishment of large numbers of peoples all over the world.

The last two centuries of increasing emissions and ecological destruction coincide with the two centuries of worsening economic inequality between and within the countries- the increasing concentration of wealth to a narrow global elite, colonial and neo-colonial subordination of countries, corporate takeover and exploitation of natural and productive resources of the south, loss of economic and policy sovereignty of southern countries to powerful and multilateral institutions as the world bank (WB), international monetary fund (IMF) and the World Trade Organization (WTO).

The system that has resulted in climate change is the same system behind structural poverty underdevelopment, which magnifies the vulnerability of millions, especially indigenous peoples, who have little or no responsibility for causing climate change (Lauron, People’s Movement on Climate Change 2010).

The United Nations intergovernmental Panel on climate change (UNFCCC) reported in 2007a steady increase in green-house gas (GHG) emissions due to human activities – from 70 percent between 1970 and 2004. Additional studies have highlighted the compounding negative impact of global warming on human livelihoods in the context of the global food and energy crisis. These include dwindling crop yields in most tropical and sub-tropical regions, decreased availability of water in many water – scarce regions, desertification and land degradation processes, change in rainfall patterns, rising sea levels, dwindling natural resource productivity and in some cases, irreversible loss of biodiversity (Kelkar,2009).

Climate change cannot be ignored as this impact seriously on the planet’s life. The adverse impacts of climate change are compounding the long-standing development crises confronting the mass of humanity. Negotiations on solutions to the climate crises are made on various levels by governments yet hardly that solutions are reached to alleviate small producers adversely affected by the climate occurring.

Their slogan remains to be “business as usual” and their greed for profit is evident in their push for market-based solutions. The presence of World Bank and giant corporations in climate talks and negotiations would tell the intentions. The drivers of the global capitalist systems is notably exploiting the climate crisis to develop, legitimize and enforce self-serving solutions that create new profit opportunities, and sustain and expand corporate power over natural resources, production and energy systems, funds and technologies.

The greatest injustice is that the peoples most involved in ecological or environmental balance and sustainability are the ones who are made to bear the worst impacts every day of their lives.

Indigenous peasants are still manage to cope and make the necessary adjustments being when asked, their common response resilient survivors. When asked, their common response is that indeed they are able to make the necessary adjustments but they do admit that their capacity to cope is becoming more difficult. Their coping mechanisms can no longer match the survival level for unprecedented loss or decline in their produce as a result of climate change. It is also crucial to note that the coping or solution required in a fast-changing situation of environment or climate cannot simply be on an individual level. Indigenous peasant women agree that solutions can only be arrived at when they are part of the solutions as they are the ones who suffer gravely of any loss or decline in harvest.

The urgent concern of rural and indigenous women is to address the climate crises and to look at how the dominant socio-economic system has breached ecological limits and destabilized the planet’s climate. Mitigation and adaptation measures detached from context and development aspirations of rural and indigenous women renege on commitments to biodiversity and sustainable development.