Gardening in the time of a pandemic: Baguio’s urban vegetable lifeline

The health crisis and imposition of the enhanced community quarantine (ECQ) due to the Coronavirus disease 2019 (COVID-19) unmasked not only the shortcomings in the Philippines’ health system but also exposed the urgency of addressing issues in food security. 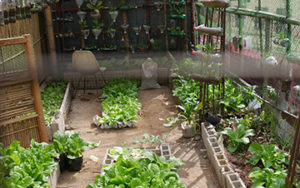 The ECQ’s implementation displaced most low-income families from their livelihood and have no means to buy food, even those who were able to set aside a little and have minimal income face difficulty in procuring food supply. This already difficult plight is worsened by the rising costs of vegetables and other commodities, and the government’s limited and meager economic aid at this time.

As people continue to find ways to keep food on their tables, urban gardening initiatives have started to gain more traction. The national and local government have even started to revive old projects to strengthen individual efforts to grow vegetables in urban areas.

The Department of Agriculture came out with the Ahon Lahat, Pagkaing Sapat (ALPAS COVID-19), or the “Plant, Plant, Plant” program to provide “adequate, accessible and affordable food for every Filipino family.” ALPAS COVID-19 is the centerpiece project of the department “to ensure sustained food production and availability, food accessibility and affordability amidst the threats of COVID-19.” The DA asked for a PhP 31 billion supplemental fund for the project, which includes the revitalization of the urban agriculture and gulayan (vegetable garden) project.

In Baguio City, the City Veterinary and Agriculture Office (CVAO) also distributed vegetable seeds to individuals and barangays. The project, which commenced on March 24, aims to provide a ready supply of vegetables for households and barangays with open spaces or pots in the coming months. The office hopes to strengthen its urban backyard gardening program, which officials tried to institutionalize in 2017.

Meanwhile, in Purok 24 Barangay Irisan, Baguio City, members of Samahan ng Maralitang Kababaihang Nagkakaisa (Samakana) are reaping the benefits of their waste management and food security project that started in 2008.

Using recycled plastic containers as pots, Agnes Gampol filled her backyard with vegetables, herbs, medicinal plants, and flowers. At the moment, she has onion leeks, chives, chili, beans, and rosemary, among others. She has roses and alstroemeria. She even planted strawberries.

“The flowers are food for the eyes,” she said.

Agnes knits bonnets for a living. Her husband is a carpenter. The ECQ’s implementation in this pandemic affected their livelihood.

Her family is among the 45,000 low-income households in Baguio City that is now banking on government assistance to get through the pandemic. Without income and with the limited economic relief provided, her urban garden has become one of their lifelines.

She said having a backyard garden helps in ensuring food supply, which became more evident with the current situation.

According to her, the idea of developing a backyard garden came after they attended training on waste management through vermiculture (vermi) in 2013. Vermiculture is the process of decomposting organic materials using earthworms.

“After the training, I just tried vermi worms for fun and to see if it works. I started with four worms, and they multiplied fast, I have been giving away worms since then,” she recalled.

Agnes said her neighborhood was able to reach zero biodegradable waste at one time by raising vermi worms.

“This is still true in my household; my children are now conscious, they segregate the biodegradable,” she said.

Besides having individual container gardens and backyard plots, members of Samakana also tilled vacant lots to increase their production. In Agnes’ community, she teamed up with some of her neighbors to cultivate an adjacent vacant lot.

Bernardita Espada, 54, is the primary overseer of the collective garden. Agnes and other members of their organization assist her. However, Bernardita, whom they call Manang Bining, takes the lead in maintaining and developing the garden.

“She was already planting some portions of the idle lot, so we asked her if we could join her and develop a wider portion for the neighborhood,” Agnes said.

The owner of the vacant lot allowed them to cultivate while it is idle. They use vermicast and compost to fertilize their crops and sunflower as a natural pesticide. The sunflower also serves as a fence to keep off dogs, cats, and chicken. Sunflower stalks grow into plants just as the vegetable seeds sprout.

Manang Bining explained that she only planted sayote, pineapple, and ginger this first quarter of 2020. According to her, the weather was not suitable for other vegetables.

“It has been frigid and dry since January, and we do not have a water source here in our neighborhood,” she added.

She recalled that in the past years, they were able to grow corn, beans, petchay, and sweet potatoes, among others. They rotate the crops depending on the weather. Around this time of the year, they usually plant petchay and beans. They can harvest the crops by June before the heavy rains come.

“But sayote is all year round because it is the most resilient among vegetables,” she said.

Apart from the seven households that cultivate the plots, the collective garden also provides for other community members. Some of their harvests even reach the public market.

Manang Bining also sells vegetables to her neighbors at a very affordable price. She said there were times that harvest was good; she sold some to the adjacent puroks. According to her, she can harvest as much as 25 bundles of sayote shoots a day during rainy days. The harvest drops to 10 bundles during summer. Her yield is enough to supply some market vendors. A bundle of sayote shoots weighs about a kilo and sells for P20-25 each. According to her, harvest this year is just enough for their consumption. Like Agnes, she said the backyard garden that they collectively till helps ease the limited income and food supply caused by the lockdown.

Long-time urban poor leader and Tontongan ti Umili chairperson Geraldine Cacho recalled that the project is among the programs of the Cordillera Women’s Education Action and Research Center (CWEARC). She is one of Agnes’ organic gardening buddies.

Aware of the daily challenge that women in urban poor communities face, the institution partnered with Samakana to address waste management and food security concerns.

The project’s overall purpose was “to enhance indigenous knowledge to support the economic survival of indigenous women in the urban setting.” The proponent integrated the concepts of ayyew (avoiding wastage) and ubbo (cooperation) as indigenous practices with organic farming and protection of the environment.

She said it started as a way to manage biodegradable waste at the household level. When their vermi fertilizer production began to gather momentum, they then started the food security and household nutrition component.

“Vermicast and vermicompost are the by-products of vermiculture; we used these to develop our organic backyard and common gardens,” she said.

According to her, other urban poor women in other areas have developed similar gardens after having vermiculture training. A similar collective garden was set up in Purok 14 also in Irisan; and also in barangays Ambiong, Gibraltar, and San Luis.

Not part of the development plan

Geraldine said that the COVID-19 crisis and ECQ highlighted the importance of urban gardening. She said that the CVAO and the DA initiatives to distribute seeds are welcome. However, she noted that the seed dispersal program in an urban setting could only succeed by assisting existing urban gardeners and intensive education campaigns.

She pointed out that local governments of highly urbanized areas, like Baguio, tend to ignore the significance of growing crops at the household and community level.

“Programs to ensure food security, especially in the urban setting, is often left out when officials plan for development. In Baguio, when we started the program, the city did not give much attention. Officials did not even entertain our call for the bottom-up approach on waste management,” she said.

According to her, the effort of Baguio in 2017 to identify agricultural barangays and promote urban gardening was a positive development. However, “the program focused mainly on promoting urban and organic gardening through competition.”

“Officials who took charge of the program failed to look at it as a strategic economic program for the thousands of low-income families in the city. Also, they did took it as an integral part of achieving zero organic waste,” she added.

Geraldine shared that among the challenges they are facing is water supply – the lack of it during summer and too much during the rainy season. Also, she said the limited space available for planting requires urban gardeners to find other ways to plant their crops, some of which requires added expenses.

“The city must assist us on these matters if it is planning to make its seed dispersal and urban gardening project. They (officials) can do more than just providing seeds like providing training on organic fertilizer. The city can also assist groups to negotiate with owners of idle lands to allow them to cultivate and develop a common garden,” she said.

“We hope that the city will look at the need to develop and assist individuals and groups practicing urban vegetable gardening in the city beyond the COVID-19 crisis,” she added.#